In the year 2025, automatons dubbed the Kikou suddenly appear and attack human beings, leaving many cities completely devastated. Human civilization is left in the ruin, but debris of a Kikou is then found in Japan. A research facility named Tokyo Kikou Institute (Toukigen) is established to investigate the Kikou’s weaponry. Following the proverb “use poison to defeat poison,” using Kikou to defeat Kikou appears to be mankind’s last hope. Nine years later, a new weapon named the Muttsu is created from the research, and it is almost ready for use in live combat. A boy, Rin Sagami, and a girl, Yuzuru Midou, are chosen to ride the Muttsu. They are entrusted with the hopes for the future of mankind, but they face the mission with courage. However, what awaits the two is a cruel fate. 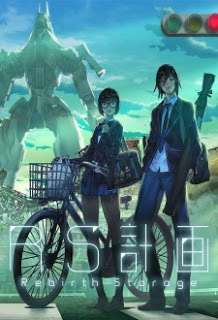