After watching a volleyball match on TV where the “Little Giant” of Karasuno High School helps his team secure a hard-fought victory, young and impressionable Shouyou Hinata begins to play the sport in hopes that he too can soar high one day. Now enrolled at the same school as his idol, he attempts to join the volleyball team despite his short stature. Unfortunately, upon his arrival, Hinata locks eyes with “King of the Court” Tobio Kageyama—a genius setter whom he had once suffered a bitter defeat to in middle school.

Their unfriendly introduction and subsequent rivalry forces the rest of the Karasuno team to bar both of them from joining the club until they can learn to work together as teammates. Though reluctant to cooperate, their desire to play volleyball causes them to return with a proposal that will show the other members that they are capable of teamwork. As the two freshmen form an odd setter-and-ace relationship, an old rival school invites Karasuno for practice matches, reigniting competition between the two schools once more. 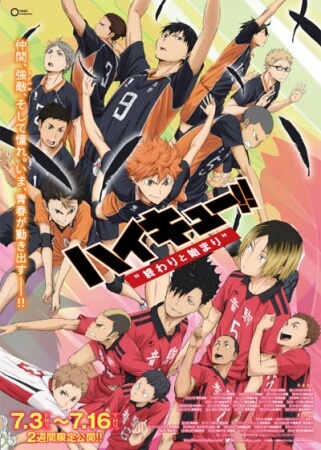