Tenchi Masaki is next in line to inherit his family shrine, the Masaki Shrine. Not matter how you look at him, he is an absurdly normal boy. Behind the Masaki Shrine, deep in the mountains a “demon” is sealed in a “Hokora” or small shrine. Tenchi accidentally unseals this “demon” named Ryoko, and she revives while Tenchi suddenly finds himself in a difficult position of having to fight! To make things more interesting, Ryoko’s longtime arch rival, Ayeka, happens to, by chance, descend to Earth. It was at this moment that Tenchi began to learn of the Jurai family that currently rules the Milky Way Galaxy! 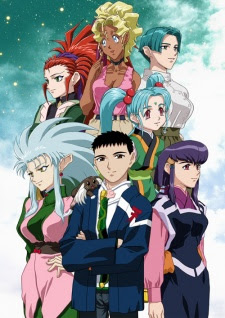