As if led by fate, after meeting Guan Yu Nu Gundam and Zhang Fei God Gundam, Liu Bei Unicorn Gundam resolves to save the world. Repeated warfare has destroyed countries that once prospered gloriously, leaving the land in ruins. Just when revival is in sight, an epidemics of the mysterious Yellow Zombie Virus breaks out. The virus carriers lose themselves and start attacking people. The survivors are forced to live inside fortified cities for protection relying on a form of energy known as “Trinity.” However, this finite energy has caused social stratification and much conflict. Each fortified city is isolated by walls, and each country is ruled by a lord. The lord Dong Zhuo has been acting in an outrageous manner since the passing of the previous lord. As if drawn together by destiny, Liu Bei Unicorn Gundam meets Guan Yu Nu Gundam and Zhang Fei God Gundam, and decides to save the world. Eventually, the passion of the three young men will bring about great change in the world. The new heroes unveil a new chapter in history! 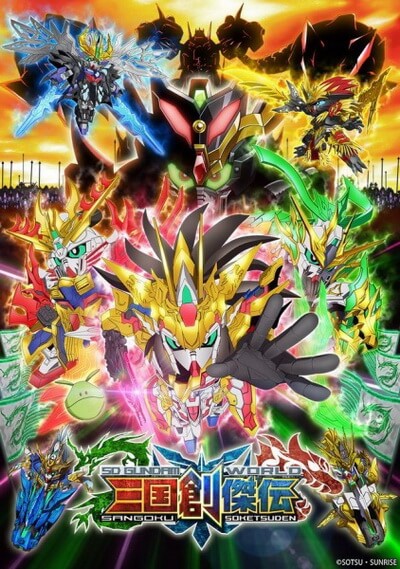